The Pigalle in Paris, France

The Pigalle basketball court is the state of the art when it comes to basketball courts visuals! Neighbors wanted a place where children could play. So the French fashion brand Pigalle teamed up with Parisian creative agency ill-studio and NIKE to spice up the site with a fresh and funky aesthetic.

A grid of grape-colored gradients, sunflower-stained strokes, and bold blue hues blanket the basketball court’s walls and floor, surrounding players in the saturated and smooth shades of a setting sun.

The inspiration was from artwork called Sportsmen by Russian Artist Kasimir Malevich with strong colors and sharp lines.  The court welcomes visitors through hot pink and bright blue gates, leading to a colorful abyss beyond. While it isn’t ideal for a 5X5 full-court game, it is ideal for photos from any angles, making it a must photograph court from any hooper. The court is an original in Paris, France, however now there are similar venues in Beijing and most recently, Mexico City. Learn more about this court in our “must hoop” feature.

The Rooftop Court in Dubrovnik, Croatia

Dubrovnik is one of the most visited summer places in Europe and Croatia. And in the middle of the Walls of Dubrovnikof that on the rooftop, there is surprisingly a basketball court. The location of the court is so unusual and breathtaking at the same time that it must be shot from all angles.

City Wall Rooftop Court is one of the most photographed courts in the world. This court on the Adriatic Sea has become one of the leading and most sought-after tourist destinations and a rare opportunity for hoopers to play on this majestic court.

The rooftop court in Dubrovnik has transformed into an architectural landmark, known for its integration of tradition and basketball. This court is the ultimate old-school experience. Good luck keeping your eyes on the ball with that view. Learn more about this court in our “must hoop” feature.

This is the most iconic basketball spot on the West Coast. Between the beach, shops, sunshine, and bodybuilders you can play basketball. By the first words of the description, you can imagine the perfect stage for photos.

People say that the best pickup basketball in the city of Los Angeles can be found at these courts. They attract players of all ages and skill levels and the courts at Venice Beach.

From families on vacation having fun to those looking for serious pick-up games, the old courts that you’ve seen in such movies as White Men Can’t Jump to the newer painted couts, you have it all. Learn more in our “must hoop” features.

The Tenement in Manila, Philippines

The famed Tenement basketball court in Metro Manila is in an unlikely location of a courtyard of an old and condemmed housing project built in 1964. One of the latest tributes on the court of the late NBA star Kobe Bryant and his daughter drew a lot of attention. The Tenement Visual Artists have been working night and day to finish the mural, and others have stopped by to light candles, write personal messages and pay their respects to the passing of the legend with his daugher.

The court is regularly painted over giving the basketball court a different experiences. Their murals have depicted Jordan, Kyrie, and LeBron… and such players at LeBron James and Paul George have even visited the courts. Props to Mike Swift, also known as Mr. Pinoy Hoops, for leading the community to upkeep the busy courts, and keeping fresh paint for photographers to admire and shoot!

The basketball court has the most breathtaking panoramic backdrop. You are virtually floating on the Pacific Ocean.

A dependable and consistent wind makes for ideal kite-flying conditions, but does impact your long shots. But, the regular Southern California sunshine and sea breeze makes this one of the ultimate basketball experiences.

We hope you enjoyed the list! Get out and find the basketball court nearest you and upload your photos on Courts of the World to help share all the amazing courts you visit! Be sure to check out our list of the Best Basketball Courts! 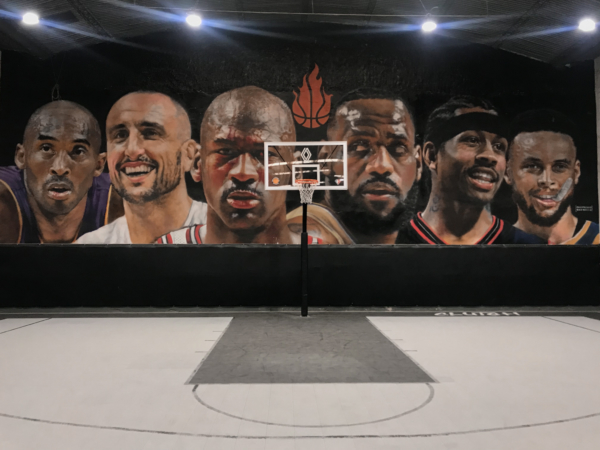 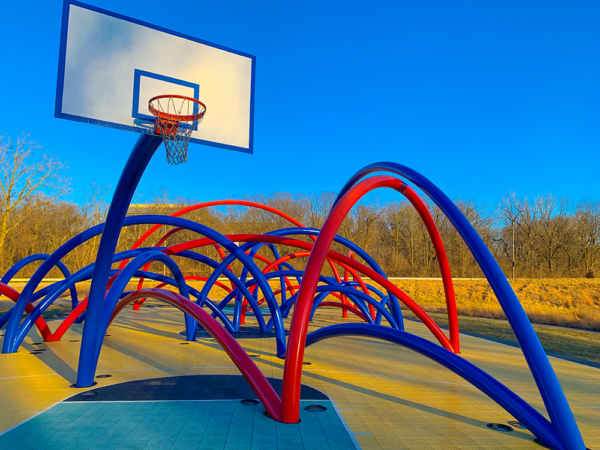 Must Hoop : Free Basket in Indiana