Can you imagine playing basketball while the great stars of the NBA watch you? This is “Clutch”, the new court in Buenos Aires that attracts basketball fans from all over the country to have a good time, and the next court in our “must hoop” series.

Lebron James, Allen Iverson, Stephen Curry, Michael Jordan, Kobe Bryant and, the Argentine idol, Manu Ginobili, will be the luxury spectators that will accompany you in this incredible basketball experience.

In Argentina, soccer is one of the most popular pillars within the culture and from an early age you learn how to kick a ball. Nowadays, it is rare to see a public place that does not have two goals to play soccer. With other sports it is not the same. However, the culture of basketball is growing, but not only on a professional level. Here in Argentina it was difficult to find a place to have fun playing basketball away from professionalism.

For this reason, Gregorio Rosello (famous Argentine comedian), together with his partners, decided to launch Clutch, a project with the aim of giving an alternative to those people who seek to play basketball in an amateur way, take their first steps in the sport or just have fun.

Thus, in September 2021, Clutch made its official inauguration and became one of the most famous and visited courts in the province of Buenos Aires.

The huge shed, which stands out for its urban style, has two courts with professional hoops, polypropylene floors (official FIBA 3X3 flooring), lockers, and even a small bar. It has very good lighting and adequate ventilation too.

As its name indicates, this court is sponsored by Adidas whose logo is in the center of the court. Its measurements are: 17.5 m X 11 m, being a little smaller than the regulation fields of 28 m X 18 m.

Unlike the previous court, “Clutch Court” is designed for matches of 5 players per team since it measures 26 m x 14 m, more closely resembling the regulatory measures.

Clutch is also known for great public figures in the country who come together to practice the sport. Among them journalists, streamers, musicians, comedians, and even great Argentine players like Facundo Campazzo (current Denver Nuggets player).

The arrival of the Clutch made many children, young people and adults begin to get much more involved in the sport, even without ever having practiced it.

For this reason, the Clutch Academy was created, a space where teachers offer basketball classes for all ages, regardless of level.

They have different schedules and it is perfect for those people who have never had contact with this sport.

While this fantastic court won’t make our top 10 basketball courts in the world, it is a must visit for hoopers living in or visiting Argentina!

Note: Text and photos (except one of Campazzo) by Franco Castany.

Must Hoop : Free Basket in Indiana 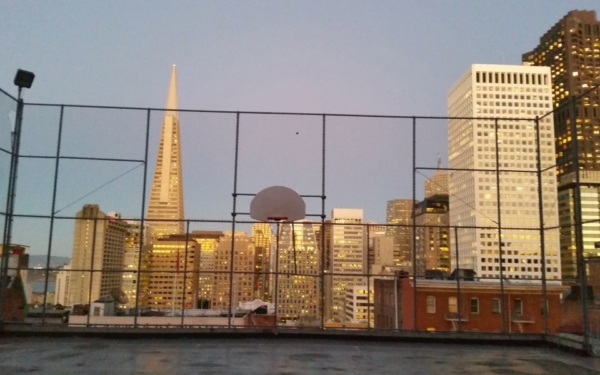 You have seen this basketball court in movies and commercials, and this secretive and private court in the Chinatown part of downtown San Francisco is...