NBA 2K21 Could Highlight Outdoor Courts of the World

Among the most anticipated sports titles of this year, NBA 2K21 is the new iteration in the 2K series that is set to release with many significant upgrades in the next-gen consoles. And, now with Zion Williamson the Naismith men’s College Player of The Year 2019 becoming the Cover Athlete for NBA 2K21 standard edition, along with Kobe Bryant honored as the Cover Athlete of the Mamba Forever edition, for the next era console versions and we couldn’t be more stoked.

But that’s not all, the new next generation of consoles have opened more doors for this popular sport’s title. With the significant performance boost of the next-gen consoles, 2K seems to be going all out with NBA 2K21.

And from what we have seen in the trailers, the game not only looks stunning, but the launch trailer has everyone excited with the scene that is very reminiscent of a very iconic court.

Yes, an iconic ball court, The Tenement Basketball Court in Taguig (Philippines), has made an appearance in 2K21. This court is an extremely popular site that was even visited by Lebron James and Paul George. It has, over the years, been used as a medium to depict many notable murals, including Nike using the site to promote the “Rise” campaign in July 2015, and now the court is being used as a to remember the tragic death of Kobe Bryant and his daughter Dianna Bryant. At one point, this court was known for having a life Kobe Bryant in all of this glory during his prime, and now it honoring him after his tragic death.

2K is known for teasing us fans, and if they are going forward with this proposition, then it is probable that we will get to see the best outdoor basketball courts in the world. We would put our bets on USA courts like the 16th & Susquehanna, Rucker Park, Venice Beach, The Cage or Mosswood, or maybe some European favorites like Paris’s Pigalle or Dubrovnic’s City Wall Rooftop Court.

NBA 2K21 is a conundrum of theories right now, but what we are sure of is that this next-gen game is coming with not only significantly better graphics but rather even better gameplay. And obviously, so, as previously mentioned, the performance boost that the game will be getting here is nothing to sniff at. The first in-game improvement will be the higher frame rate. Instead of 60 fps, we will be getting much better frames, leading to smoother dunking, better ball pass, and, most importantly, lower input lag.

This allows for crisp movement around the court and actually complements the fast-paced play style that the NBA 2K series is known for. And with the 8K support that these consoles will launch with, the game, as seen in the trailers, looks soo much better than its predecessors… and let’s hope a variety of courts of the world!

Although the game was delayed due to the pandemic, 2K has been working hard behind the scenes to get the NBA 2K21 out. Now, after some delays, 2K has confirmed 4th September 2020 to be the launch day, and going forward, another version of the game will come out with the next generation at the end of this year. 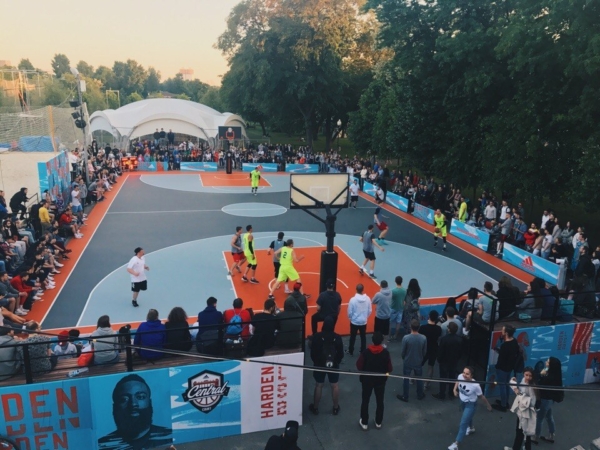 Must Hoop : Rizhka in Moscow, Russia

The the famous Rizhka outdoor basketball court in Festival’nyy Park (Парк Фестивальный) in the capital of Moscow is a “Must Hoop” when visiting Russia.

If you are a baller looking for a ‘serious’ pickup game, then Siri Fort in New Delhi, India is just the perfect place for you.